FTX Bankruptcy: What Does It Mean For Crypto? 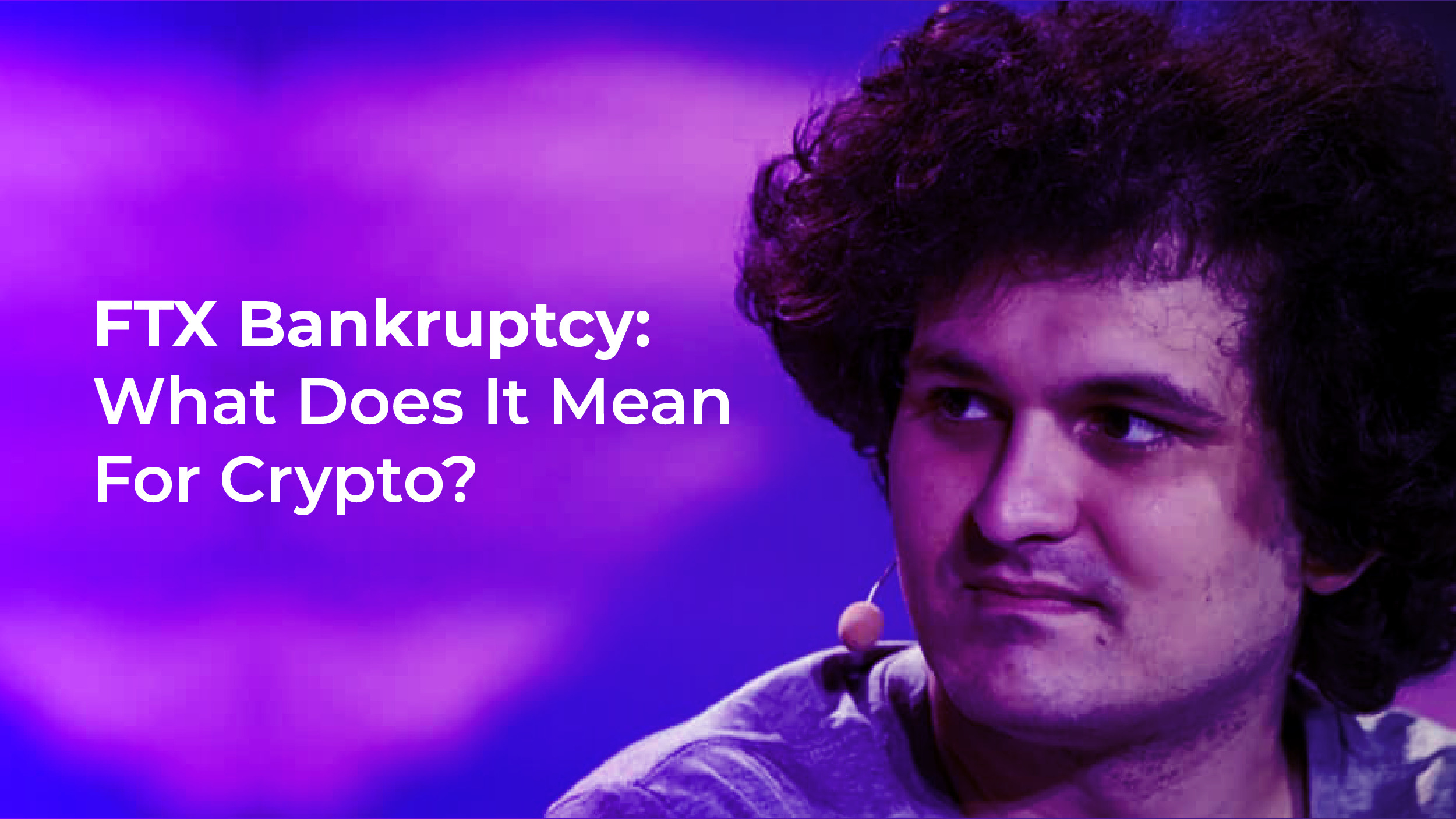 If you’re out of the loop, crypto is making negative headlines. FTX is the culprit; the centralized exchange has put in a bankruptcy filing and has frozen funds stored on their exchange. With bankruptcy, dodgy loopholes, and a $477 million hack in the space of a few days, things aren’t looking good for crypto in the near future.

FTX is a centralized crypto exchange with its headquarters in the Bahamas. The name is a shortened version of “Futures Exchange” and it was founded in 2019. Despite being a relative newcomer to the crypto industry, FTX rocketed in popularity and was the 6th largest crypto exchange by volume during the bull run of 2021.

The exchange also had an affiliate called FTX US which allowed it to operate in the states with notably less offerings.

FTX was a competitor to the likes of Binance, Crypto.com, Kucoin and Huobi – like these, it had its own token with its own perks for holders. The token, FTT, is down 92% in the last 7 days.

In 2019, Sam Bankman-Fried founded FTX. Just half a year later, CZ of Binance bought a 20% stake in FTX (this was later bought back by FTX). In late 2020, they acquired Blockfolio, a crypto portfolio tracking app, increasing their awareness to retail investors.

By August 2021, Sam Bankman-Fried owned 90% of Alameda Research and FTX was one of the largest crypto exchanges in the world. They set up a venture fund, announced it would soon begin offering stock, and it seemed like everything was going just fine… In May and June 2022, Alameda Research made heavy losses. According to an anonymous tip sent to The Wall Street Journal, Sam Bankman-Fried, majority owner of Alameda and CEO of FTX, decided it would be a brilliant idea to transfer more than half of its customer funds from FTX to Alameda as a way to recoup the lost money. This was explicitly forbidden according to FTX’s terms of service, something that both Bankman-Fried and his senior associates knew.

CZ announced on Twitter that “recent revelations [had] come to light” and he was going to sell all Binance’s holdings in FTT – the equivalent of $2.1 billion at the time.

This announcement led to a mass sell-off of FTT as people started to suspect something fishy was going on. However, those with funds on the FTX exchange suddenly found themselves in more trouble. FTX didn’t have enough liquidity to repay people’s money.

Binance to the rescue?

CZ of Binance, who was one of the reasons the panic selling began, offered to save the day with a non-binding agreement to purchase FTX. However, on November 9th, he withdrew his offer, citing FTX’s mishandling of customer funds and pending investigations as his reasons.

While Binance may have pulled out of the deal to acquire FTX, they are still trying to help the situation. On November 14th, CZ tweeted that Binance would be setting up an industry recovery fund “to help projects that are otherwise strong, but in a liquidity crisis.”

SBF is the FTX CEO, Sam Bankman-Fried. Not only was he famous for founding Alameda Research and the crypto exchange FTX, but he also made waves in the Solana ecosystem.

He went from being the world’s youngest billionaire to bankrupt in under a week.

Why is Solana crashing?

Solana is indirectly mixed in with this whole crisis.

SBF invested in Solana way back before most people had even heard of it. In fact, Alameda Research was one of the key investors during Solana’s fundraising period. While FTX and SOL are not directly related, the fact that Alameda holds a large number of SOL is causing some people to sell as they expect Alameda will need to sell their holdings to balance their books.

This is only further exacerbated by the fact that FTX and Alameda’s wrapped assets on Solana are no longer redeemable. soBTC, the wrapped version of Bitcoin on the Solana network, has dropped more than 60% from its peg to the real BTC price. This is a big cause for concern within the Solana ecosystem.

It’s thought that Alameda Research owns around $1 billion of SOL.

Can I Withdraw from FTX?

Right now, FTX has halted withdrawals. People with funds on FTX cannot remove them. Surprisingly, this is not because of the liquidity crisis, rather it’s due to a hack that happened on 12th November.

Just hours after FTX filed for chapter 11 bankruptcy protection in the U.S, it began investigating “unauthorized transactions” of up to $477 million.

It is still unclear as of yet whether this was the result of a hack, or somebody on the inside siphoning off funds as the whole business collapsed around them.

What we do know is that almost $500 million dollars simply vanished.

What is the Bahamas Loophole?

The Bahamas Loophole was a way for you to withdraw your money from FTX, but only if you had KYC in The Bahamas. Quite a few whales took advantage of it. Within 5 hours of the loophole being publicly mentioned by FTX, 8 addresses withdrew more than $1 million each from the exchange. It is rumored that some people even paid for KYC in the Bahamas and bribed FTX workers to process them.

What sounded like a fishy and likely illegal way to get your funds out of FTX seems to be exactly that. The Security Commission of The Bahamas has announced that they never authorized or even suggested the use of this loophole and that the funds withdrawn this way could well be clawed back.

Now that both LUNA and FTX have imploded, bringing the market to new lows each time, people are starting to wonder who’s next. While there is still the threat of stable coins depegging, the main focus of fear right now is on centralized exchanges.

In the fallout of the FTX drama, it was noted that just a few weeks earlier, Crypto.com had sent 320,000 ETH to an address associated with Gate.io. This was particularly odd because Crypto.com claims that 100% of user funds are held in cold storage with their partner, Ledger.

The Crypto.com CEO claimed that this was intended to be sent to offline storage, but went to a whitelisted Gate.io address instead. They reached out to the Gate team, resolved the issue and the money was returned.

Since then, several theories have started circulating about some of the biggest crypto exchanges and how they perhaps don’t have as much liquidity as they make out. Who would have thought it? Centralization being a problem again…

There is one rule in crypto that everybody should know: not your keys, not your crypto.

Always store your crypto in your own private wallets. Whether you opt for cold storage or hot storage is up to you, but leaving them on a centralized exchange is relying on a third party to look after your money for you – many of which clearly aren’t as well organized as previously thought.

Read our guide for understanding crypto wallets, and check out our review of the best crypto wallets in 2023 and beyond to help you pick.

In addition to getting your crypto off of centralized exchanges, it’s time we started using DeFi (decentralized finance) more often. This is what crypto was all about when Satoshi first created the Bitcoin protocol. You own your own money and the entire financial system is decentralized.

Elastos’ native DEX, Glide Finance, is a great place for you to try out decentralized finance. You can get started by creating an Essentials wallet and receiving your very own free DID (Decentralized Identifier).

Times are hard and the ups and downs aren’t for everyone. If you are stressed out by this space, it’s okay to take some time away from crypto for a while. Spend time with family and friends. Get outside and breathe some fresh air. Despite the volatility, blockchain technology and web3 isn’t going anywhere.