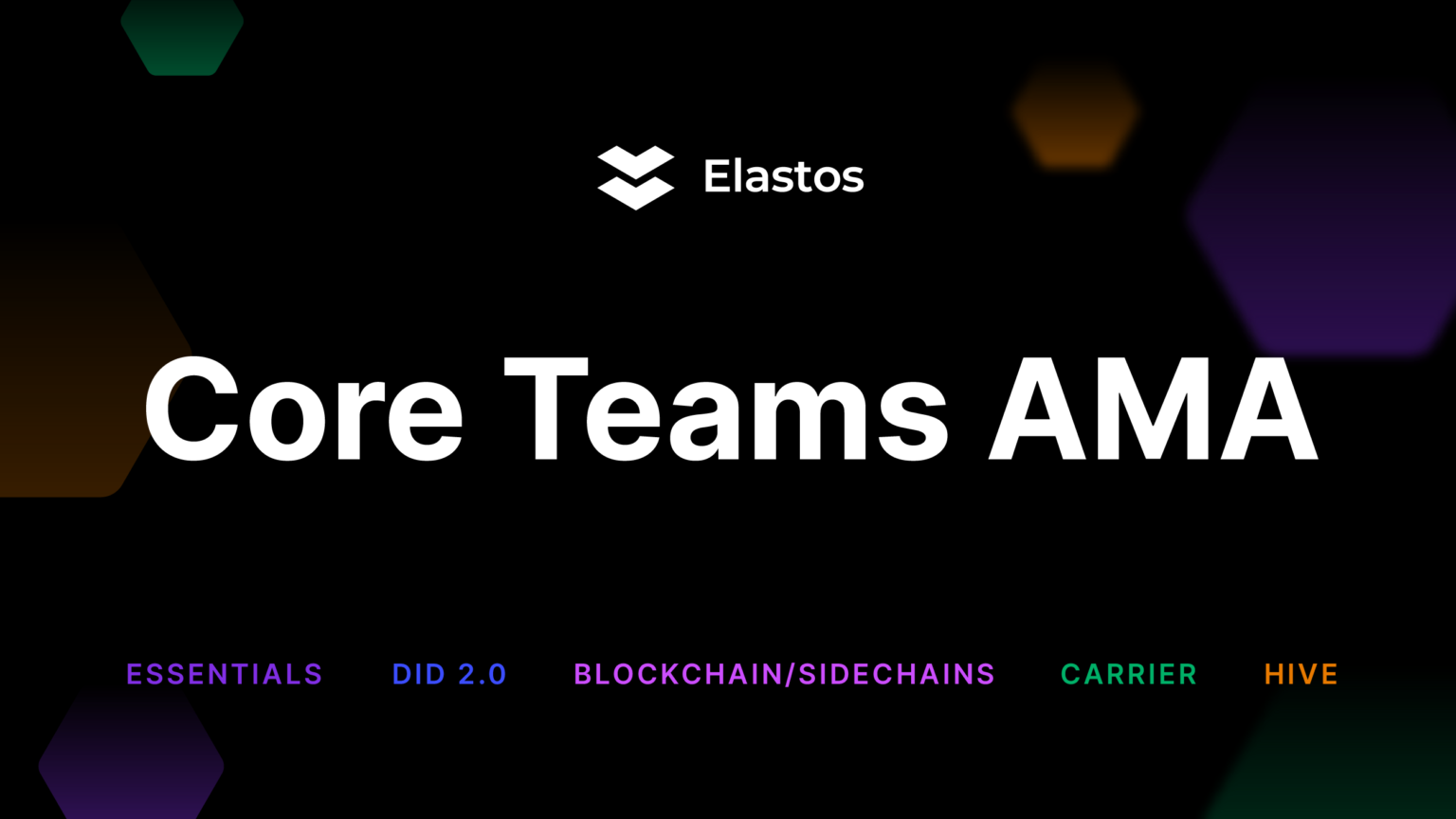 The Elastos Info Team collected community questions for the core development teams to answer. Translations are printed below in their entirety.

When will Carrier 2.0 be complete? Can you explain what Carrier 2.0 is and why it is both important and an upgrade over Carrier 1.0?

Carrier 2.0 is one of our main focuses, and it is currently in the development stage. We aim to complete the development of the core component in Q2 and release the technical preview in early Q3. Following up on Carrier 1.0, Carrier 2.0 brings a number of improvements:

Are there any plans to create a fully functioning messaging dApp with notifications?

How will you incentivize people to run a Carrier Node?

Carrier 2.0’s economic model has taken into account many considerations. Carrier has a clear supply and demand model, and we aim to combine its demand-supply dynamics with the design of its economic model. Carrier Super Nodes can receive benefits from providing services, and will attract interest on that basis.

How is the progress on DPoS 2.0, and do you have a specific launch date?

DPoS 2.0 is currently in the test phase, which includes a functional test, stress test, and test network commissioning. DPoS 2.0 is slated to go online Q4 2022.

Can we expect more SDKs, specifically a Python SDK?

At present, the wallet SDK for C++ is mainly used to provide Essentials with support for interactions with main chain and side chain nodes. There is no plan to develop a Python SDK.

It seems like the Core Dev Teams are alienated from the western community. We don’t know much about each team member. I understand there are language barriers, but can we use a Cyber Republic chat forum (built-in translator) to communicate with each other?

As the founder and promoter of the Elastos Smartweb, the EF has worked with 10+ community teams around the world over four years. Since its establishment, the EF has been committed to infrastructure development of the Elastos Smartweb in alignment with Web3 principles. At the beginning of the project, the EF promoted some community construction. Since Cyber Republic Consensus (CRC), Elastos’s third-level consensus, went online, Cyber Republic has become the representative of the Elastos community. 12 members elected by communities from different regions of the world lead the community via CR operations and CRC. At the same time, as a member of the community, the EF actively participates in the community and makes every effort to contribute to it. Each development team cooperating with the EF regularly publishes its own development roadmap and participates in various activities organized by the community, such as this AMA. It must be pointed out that the infrastructure development tasks of Elastos SmartWeb released by the EF are different from the application projects for end users. These infrastructure development tasks serve to support the operations of the foundational layer of the Elastos Smartweb. The cooperative teams and engineers who undertake these development tasks take on heavy engineering work within a predetermined period. After each functional development and corresponding testing is completed, the corresponding technical documents need to be rearranged and reviewed to enable application developers to consult the documentation, and ultimately use the technologies. These engineers cannot communicate in real time as they do with end users. If community members or application developers have questions, they may ask questions, leave messages, or use AMA documents on Discord. A reply will be provided after cooperative teams complete a node according to the project plan.

What happens when the EF dissolves – do core dev teams shift development over to the community? Speaking on this, why is it that each team does not hire more developers across the globe to help speed up development?

The EF has been adhering to the non-profit principle to fund cooperative teams and ecosystem projects, and does not participate in their operation or management, nor does it pursue or receive profit from them. Each cooperative team organizes and recruits its own team according to its infrastructure development tasks and engineering plans. Members of cooperative teams come from different regions and speak different languages, and are very much global in nature.

Although the documentation is much better than a few months ago, as a dev/engineer, it’s frustrating trying to understand the lack of documentation. Are there plans to improve this?

Yes, there are. Although our documentation is much better now than before, there are still some problems, as well as some gaps concerning the needs of community developers. We will continue to supplement and improve the documentation. In addition to continuing to supplement the documentation content, our development team will be working on improving the original content, and missing content will be filled in according to the suggestions and needs of community developers.

Hive Vaults store application data, but theoretically would it be possible for Vaults to also work as personal cloud storage for images and files (Think iCloud, Google Drive, etc.)?

Yes, Hive can be used in similar applications as iCloud to store files. In fact, a similar application can be developed based completely on Hive. In addition, a decentralized HiveHub webApp is being designed and developed by the Hive Team. Ordinary users can choose a Hive Node which is credible and runs well on HiveHub to create a Vault, and to view and manage their own Vault data. Users can also build and run Hive Nodes by themselves, and may register them on HiveHub for other users to use.

Are there new sidechains planned?

Presently, there is no development planned for any new sidechains.

On the topic of sidechains, is a Cosmos Sidechain or any other cross-chain network possible?

From a technical point of view, Elastos’ sidechains can support Cosmos, although development would be required for a new sidechain based on the Cosmos SDK. A Polkadot Sidechain is also feasible, but again, it would require the development of an additional, parallel sidechain.

What kind of TPS is ESC currently running at? Any plans to make it even faster?

The TPS of the ESC Sidechain is currently around 45, and there is no plan to further improve this index at present.

Is it really necessary to have a different token for the ESC? Can’t we find a way to make it work with the ELA mainchain token?

The ratio of ELA on the main chain to ESC is 1:1, so as to realize the mutual transfer of ELA between the main chain and sidechains. This mechanism is integral in enabling the expansion of the Elastos ecosystem. The transaction fee on ESC can be paid directly in ELA cross-chain, and ELA can also be used to participate in ecosystem projects directly. The ELA obtained on sidechains can be transferred back to the main chain to complete the closed loop, so there is no need for additional tokens. Of course, the ESC supports Ethereum smart contracts, and ecosystem projects may choose to issue their own tokens via its contracts.

What sort of use cases does the development of Carrier 2.0 and Hive 2.0 open up? Can you provide an example of a unique application that could be built using these technologies? Or explain the two technologies in layman’s terms and how they compare to traditional communication/storage technologies?

It is hard to say that a particular application must depend on one technology. In most cases, there are alternative technical implementation schemes, which may offer different advantages and disadvantages, and confer unique characteristics. As far as Carrier and Hive are concerned, we aim to build a dApp communication model and a dApp storage model to support Web3 applications – in other words, to support the Elastos vision. For example, the new version of the Feeds application uses Hive and Carrier in combination, and relies on the decentralized storage service provided by Hive. Compared with Feeds’ previous version, user experience has been greatly improved, especially because it is no longer dependent on a dedicated device, which greatly lowers the user’s usage threshold. When it comes to the difference between traditional communication and storage models, the core idea is to give users the right to choose. This way, users can control their data, unlike on platforms operated by traditional service providers.

What is the strategy behind implementing Lightning Network capabilities for ELA mainchain? What utility / use cases does that create?

What are the roadmaps like for the Essentials Wallet? Can you make an option to simplify the wallet? Like simple mode: only showing portfolio. Professional mode: showing everything. Something like this?

Elastos Essentials Roadmap items for 2022 are as follows:

In regards to simplifying the wallet, we are open to brainstorming new solutions. I would like to discuss this topic openly on Discord in the Essentials channel – please come by!

Having a “Simple Mode” similar to what you have described may be quite useful. However, we do need to clarify what exactly users consider to be imperative, features they would like to be included in such a “Simple Mode.”