NFT Environmental Impact: Should We Be Worried? 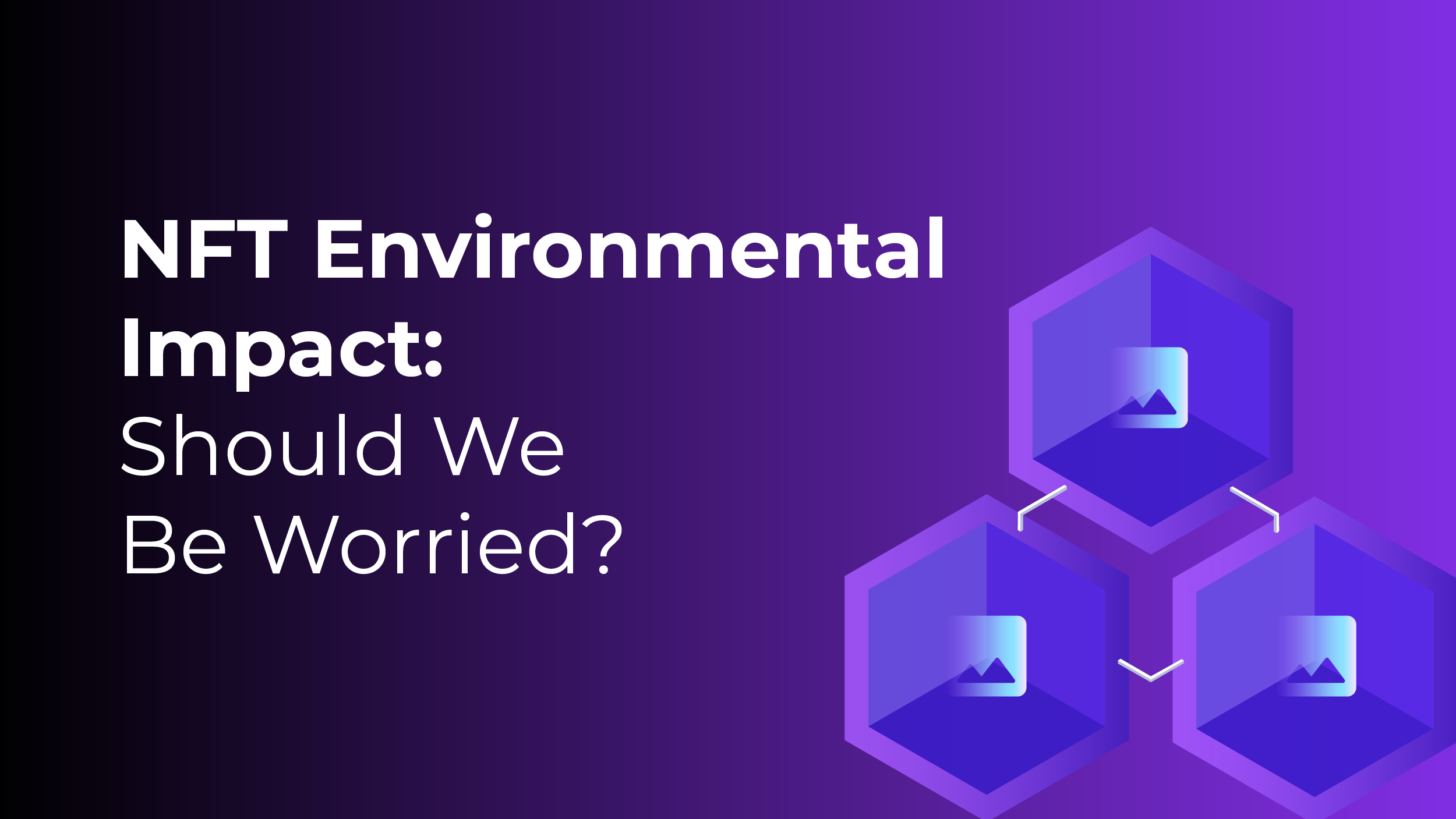 If the mainstream media has anything to say about NFTs, it’s that they’re useless JPEGs that are responsible for greenhouse gas emissions that could destroy our planet in the near to not-so-near future.

What they fail to recognize is that not all NFT transactions take place on the Ethereum blockchain – the energy consumption king of crypto. In fact, even the NFT transactions that do take place on the Ethereum blockchain only take up around 1% of the energy of the network. They’re hardly a cause for an increase in mining, which is predominantly driven by price speculation of ETH, Ethereum’s native currency.

But clearly NFTs have some environmental impact. So what’s the extent of it? And should we be worried?

If you’re not up to date on NFTs, or non-fungible tokens, you can read our NFTs for dummies guide.

Essentially, these tokens provide proof of ownership that can reflect real-world assets. While they’re currently used predominantly for profile pictures, there are plenty of NFT use cases being cooked up by leading crypto companies.

All you need to know is that the proof of ownership that NFTs offer is made possible using blockchain technology. Because some blockchain platforms are not energy efficient, and anybody can create as many NFTs as they want, NFTs are being painted as the villain.

Are NFTs bad for the environment? The main argument, which is usually targeted at the whole NFT ecosystem, is that Ethereum transactions are becoming unsustainable.

According to Digiconomist, one single transaction on the Ethereum blockchain has the same carbon footprint as watching over 20,000 hours of YouTube. Alternatively, one transaction produces the same amount of electrical energy as the average American household does over 7 days. The carbon footprint of the whole network is said to be comparable to the entire country of Norway.

It’s also worth mentioning that there are plenty of blockchains that already use the Proof-of-Stake model and also support NFTs. While the average NFT transaction takes place on the Ethereum network, there are alternatives with less energy consumption.

Elastos is one such blockchain. Its main chain piggybacks off of Bitcoin’s Proof-of-Work security without any additional cost to the environment, while its side chain with smart contracts uses a Proof-of-Stake system to maintain. This makes it one of the most decentralized, secure, and environmentally friendly blockchains in the crypto space. We’ll talk more about Elastos in a little while… Why does it take so much energy to trade NFTs?

In order for miners to add blocks, they must solve complex puzzles faster than any other miner. These complex puzzles are completely arbitrary, but take an increasing amount of computing power. This Proof-of-Work system is the same one that Bitcoin currently uses.

Crypto mining is energy intensive by design, but many fear that the greenhouse gases these blockchains emit are not worth the security and decentralization that they offer in return. Swedish officials have called for an EU-wide ban on crypto mining, claiming the European Union will fail to meet its climate targets if Proof-of-Work blockchains continue.

With the upcoming Proof-of-Stake system, electricity usage will be drastically reduced. The previous puzzle-solving will become unnecessary. Miners will be replaced by validators that perform the same function, but instead of expending energy in the form of computing power, they will stake ETH as collateral against dishonest behavior. Any dishonest behavior results in the perpetrator’s ETH being “slashed”. This is a slightly less secure model than Proof-of-Work, but it costs far less energy, and thus it’s faster. It’s also way cheaper.

The gas fees for minting non-fungible tokens (NFTs) on the Ethereum blockchain are currently around $20. Compared to the bull run highs, these are fairly low. What you might not know is that you’ll also encounter gas fees for making bids, accepting offers, and transferring NFTs. If you’re not careful, you could find yourself at a loss even when selling an NFT. In fact, for a long while, the Ethereum blockchain hasn’t been a great choice for newer artists. While most NFTs are minted on Ethereum, there are faster, cheaper, and more energy efficient blockchain platforms available. They might be less popular, but the other benefits make up for it.

Ethereum’s full transition, also known as the Merge, from Proof-of-Work to Proof-of-Stake is said to take place in Q3/Q4 of 2022. The new Proof-of-Stake system is expected to be 2,000 x more energy efficient than the current system.

So what does this have to do with NFTs?

The environmental impact of NFTs is often placed side-by-side with Ethereum’s lack of renewable energy. These digital assets are tarred with the same brush as Ethereum because the greenhouse gas emissions generated by Ethereum and other Proof-of-Work blockchain platforms include the transactions used for minting, buying, and selling NFTs.

A single NFT creation on Ethereum can be costly – for as long as it remains a Proof-of-Work blockchain – but a specialist from Nifty Gateway has said that NFTs make up as little as 1% of the Ethereum network. For this reason, Andrew Bonneau, a carbon market advisor from Offsetra, said, “the speculative value of Ethereum is a bigger driver of how much mining is occurring.”

In this context, the environmental impact of NFTs is incomparable to how much energy the rest of the network is consuming. While some have called for a batch process so that transactions are grouped together like on the Bitcoin Lightning Network, it’s more reasonable to sit back and wait for Ethereum 2.0.

In the meantime, greener NFTs can be found on other blockchains. Elastos is one of them, but more on that later…

What are digital artists saying?

Mike Winkelmann, more popularly known as Beeple, believes in a more sustainable future. After breaking the record for the most expensive NFT ever sold (which has since been broken again), he announced that his artwork will be carbon negative, or at the very least carbon neutral, from now on. As a supporter of carbon offset, Beeple will be investing in renewable energy, conservation projects, and tech that extracts carbon dioxide from the environment.

He’s not the only digital artist to be conscious of dwindling fossil fuels. Many in the digital art world would prefer clean energy. Some artists have begun planting trees to offset their carbon footprint, while others have been announcing their energy costs publicly to raise awareness. French artist, Joanie Lemercier, announced that one sale of a single NFT equates to two years’ worth of electricity consumption in his studio.

As the metaverse is poised to be the next huge digital revolution, more and more NFTs will be minted. Just recently Illuvium raised over $72 million in its first digital land sale on gas-free layer 2 protocol, Immutable X. The sale, which lasted just a few days, included 20,000 plots of land, each one an individual non-fungible token in its own right.

Mass NFT sales like this one are something that will only increase with time, and as Illuvium has proven by choosing a layer 2, Ethereum is too costly both to the environment and to the consumer. It’s time for digital assets to be created in a way that isn’t damaging to the environment.

What is the most environmentally friendly digital ledger?

While it’s clear that these energy intensive blockchains can’t stand the test of time, it’s also clear that the environmental impact of NFTs isn’t quite the demon it’s been portrayed to be. However, if you want to have a clear conscience when purchasing your crypto art, there are some blockchains that you can turn to.

The biggest competitor to Ethereum for NFTs is the Flow blockchain. NBA Top Shot is an NFT marketplace that launched in 2020 and was marketed towards people that were new to crypto art. As NFT marketplaces go, it’s been widely adopted by NBA fans who use the platform to buy, sell, and trade basketball video clips.

Other Proof-of-Stake blockchains that you could use to mint your non-fungible token include: Cardano, Binance Smart Chain, Solana, Polkadot, Tron, Avalanche, Polygon, and of course, Elastos.

Why is Elastos the best choice for minting NFTs?

Unlike energy hungry blockchains like Ethereum, Elastos is the only blockchain that solves the trilemma of crypto: decentralization, security, and scalability.

Decentralization is a key aim for crypto enthusiasts; this is why many have overlooked the environmental impact in their quest for total decentralization.

The Elastos Foundation is dissolving. Elastos is currently operated by a DAO (Decentralized Autonomous Organization) and has been for three years. In fact, the elections for the new council are taking place presently.

The hybrid consensus mechanism of Elastos gives the main chain the security of Bitcoin with no additional greenhouse gas emissions. Besides Bitcoin, Elastos is the most secure blockchain in all of crypto.

The side chains of Elastos are secured by the main chain, but also by a Proof-of-Stake consensus algorithm. Elastos takes the best of both worlds to ensure maximum decentralization and security.

Finally, its scalability solution is based on multiple chains. The Elastos Smart Chain is the one that you can use to create digital assets for a fraction of the price and energy of Ethereum. By having limitless numbers of side chains, Elastos can grow infinitely without being burdened by slow transaction times or energy consumption worries.

Environmental impact of NFTs on Elastos

As the carbon emissions of Elastos are far lower than that of Ethereum, it makes sense that the environmental impact of NFTs on the Elastos Smart Chain is far lower too. Even when compared to some other Proof-of-Stake blockchains, Elastos consistently comes out on top for solving the trilemma of crypto.

If you want your non-fungible tokens to be environmentally friendly, as well as fast, cheap, and secure, then Elastos is the place for you.