How Will the Ethereum Merge Upgrade Change Crypto? 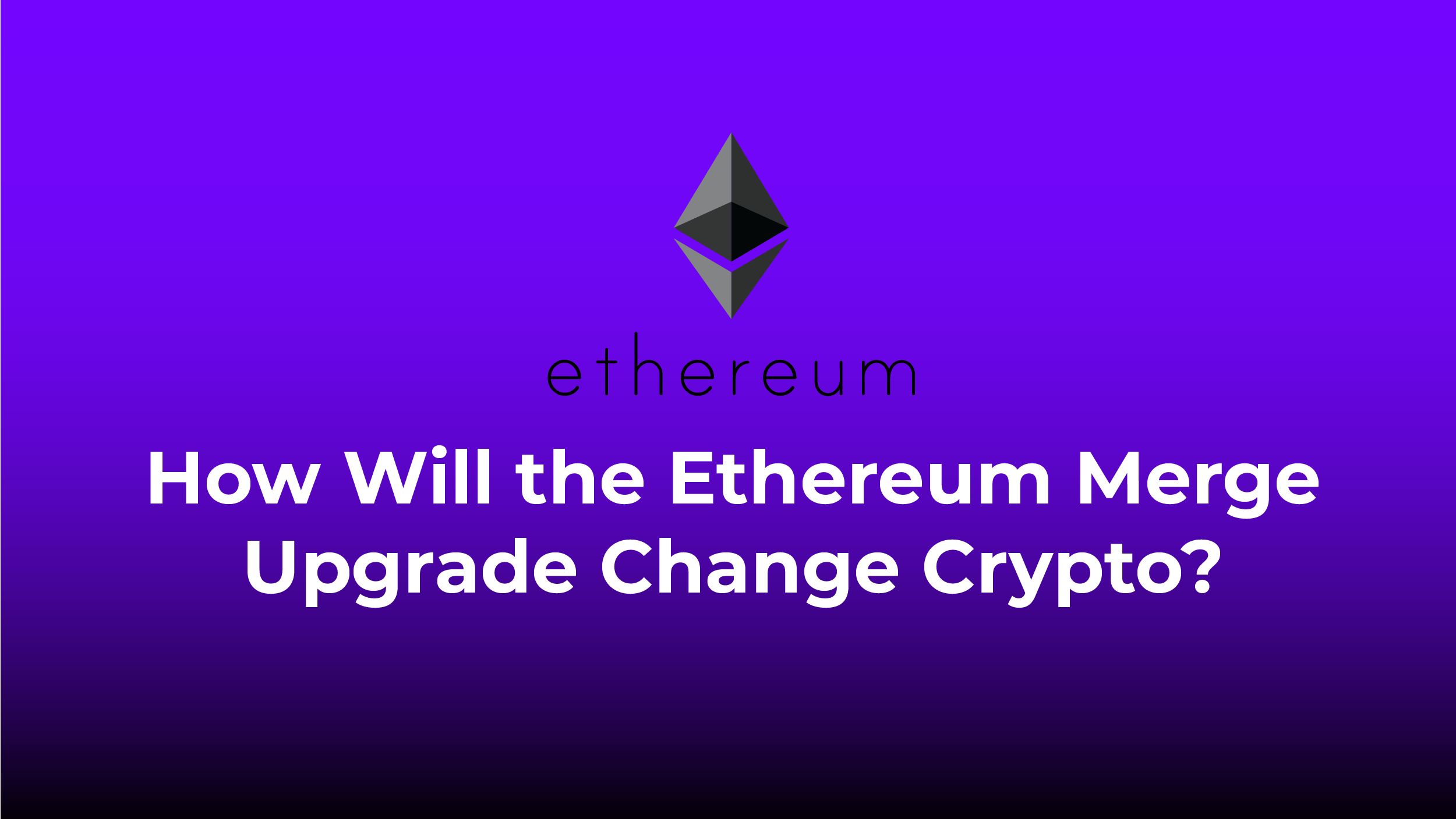 On Wednesday 15th September 2022, the long-awaited Ethereum Merge upgrade finally went live. This historic transition from Proof-of-Work to Proof-of-Stake has cut energy consumption by more than 99%! But what role will it have on the rest of the crypto space?

What is the Merge?

Ethereum has gone through several big upgrades in its time, but none have been more anxiously anticipated than the Merge. After significant testing of the Merge Ethereum Mainnet, it finally merged with Beacon Chain on Wednesday. It allows Ethereum to switch from its current  energy-intensive Proof-of-Work (PoW) consensus mechanism to a far more energy efficient Proof-of-Stake (PoS) model.

Because PoS requires far less energy (99% less!), the Merge has been viewed as a good thing for the vast majority of crypto enthusiasts. In fact, the Ethereum Merge supposedly cut the world’s energy consumption by 0.2%, with Yahoo dubbing it one of the biggest decarbonization events ever.

If you take a look at the energy consumption graph by Digiconomist, it looks more like the price chart of Terra LUNA than anything else. What PoS means is that instead of solving energy-intensive but arbitrary puzzles to secure the Ethereum network, it will require validators to authenticate transactions, with ETH holders now being able to stake ETH to earn passive income and further secure the network. It will switch Ethereum’s execution layer to a consensus layer.

However, while this dramatically cuts energy consumption, it will have no immediate effect on the network capacity. Gas fees will not be noticeably different, nor will transaction speed.

What isn’t the Merge?

Many who only pop in and out of crypto will be dismayed to learn that there will need to be another upgrade to achieve lower gas fees and faster transaction speeds. It was rumored for a long while that the once-fabled ETH 2.0 would speed up the network and lower fees. Clarified in recent months, this is not the case, nor was it ever.

Future scalability upgrades can now be built on top of Ethereum’s significantly lower carbon footprint, but these may take many months or even years to be developed.

As Ethereum will switch to the Proof-of-Stake consensus layer, it necessitates a different type of block validation. Running an Ethereum node is simple – you don’t even need to hold any ETH.

By running an Ethereum node, you are contributing to the security of the network and enhancing its decentralization. You won’t need to rely on third-party servers that can threaten your privacy. You also don’t need to worry about censorship. If you aren’t clear on what a node is, check out our guide to peer-to-peer networks which explains their role in networks in more detail.

The other key factor of running a node after the Ethereum Merge is that nodes will check and verify the validators’ blocks to ensure that everything is correct. The more nodes there are, the more decentralized and secure the network is.

Speaking of nodes, Elastos was the first cryptocurrency to have more than one million nodes, completely and utterly bulldozing Bitcoin and Ethereum’s 10,000 nodes at the time. While these nodes were “Carrier nodes” that carry traffic via a TV box rather than traditional nodes, they still blew its competitors out of the water in terms of wider adoption and decentralization. The new and upgraded Delegated-Proof-of-Stake 2.0 will be finished soon, making running a node on Elastos a lot easier.

While Ethereum’s Merge went smoothly, stakers cannot currently withdraw staked ETH. Only when the Shanghai upgrade is released will this be possible.

The Shanghai upgrade is part of a bigger upgrade – the sequel to the Merge, known as the Surge. The Verge, Purge, and Splurge are still to come too!

The Surge, Verge, Purge and Splurge

Ethereum founder Vitalik Buterin claims that once these five rhyming upgrades are complete, the Ethereum network will be able to process 100,000 transactions per second. So what are they?

The Surge upgrade is the next milestone for the Ethereum network. It will enable sharding, which the Ethereum Foundation claims will improve Ethereum’s scalability and network capacity. It will bundle transactions and enable Layer 2s to offer lower gas fees. The Surge also contains the preliminary Shanghai upgrade mentioned above, which will enable stakers to withdraw staked ETH.

You can expect the Surge sometime in 2023.

The Purge is all about reducing network congestion and eliminating historical data and bad debt. It reduces the harddrive space needed for validators.

The Splurge upgrade was less detailed in Buterin’s talk, but essentially revolves around all the miscellaneous leftovers needed to ensure the previous four upgrades operate smoothly and effectively.

Check out the full roadmap here. Now, the big question. While Ethereum’s updated roadmap may sound great on paper, if and when it actually manages to complete these five upgrades remains to be seen.

In the meantime, the pressure is on for all the other Layer 1s that are already energy-efficient, with super fast transactions and near-zero fees. It’s time for them to get moving on the adoption front before the Ethereum network catches up technologically.

It’s no secret that there are a handful of other smart contract platforms that have been gunning for Ethereum for years;

A PoS, EVM-compatible smart contract platform, BNB offers a more centralized alternative to Ethereum. It’s the second largest smart contracts blockchain in terms of market cap, and its fees and speed are far better than those on Ethereum. It’s also integrated with one of the biggest crypto exchanges in the world: Binance.

Launching the same year as Ethereum (2015), Cardano set out to solve the scalability problem; however it took them 6 years just to release smart contract compatibility. Because of this, ADA is lagging behind in terms of adoption and DeFi.

Dubbed the fastest blockchain in the world, Solana brings speed and cheap transactions, but at the cost of centralization. It’s also gaining quite a reputation for not working properly as its low fees make it an easy target for a DDOS attack.

Another EVM-compatible chain, Avalanche has seen rapid development over the past few years, but it too suffers from too much centralization. Fees can be quite steep while its user interface often comes under a lot of criticism for being downright ugly.

There was also a recent scandal that indicated Ava Labs was using dirty marketing tactics to smear their opponents. Founder, Emin Gün Sirer, dismissed the claims as “obvious nonsense.”

Branded more as a “Layer 0”, Polkadot is a fast and interoperable PoS blockchain that aims to provide a scalable platform in which any conceivable application can create their own specialized blockchain. It has solid tech, but the parachains it uses are limited and slots are sold at auctions which price out smaller use cases. The code has also been exploited multiple times, with malicious actors draining millions of dollars.

An interoperable “internet of blockchains” competitor to Polkadot, Cosmos is a top-tier blockchain with over 250 apps, dApps, and services that have locked in more than $60b. Its development kit makes it extremely easy for developers to build new applications, but its brand awareness is not as spectacular as its competitors. There’s also a big red regulatory flag as Cosmos launched as an ICO and could very well become a target for the SEC.

Did someone ask for a decentralized network with a legally registered 4-year-old DAO, as well the most secure hybrid consensus mechanism ever conceived? Oh, and it’s lightning fast with fraction-of-a-penny-fees. Meet Elastos, the Ethereum competitor you never knew you needed.

Okay, let’s not get ahead of ourselves. Like with all projects, there are weaknesses here too. Elastos’s brand awareness isn’t as big as the top dogs, and its ecosystem, while growing, is not as sprawling as some of the others, but the underlying tech and its solution for the crypto trilemma is indubitably top-tier.

With a strong focus on data ownership, the Elastos Smart Chain (ESC) retains the security of Bitcoin by piggybacking off its hashrate (at no additional cost to the environment) while operating a Delegated-Proof-of-Stake consensus layer too.

While the Ethereum Merge will mean that Ethereum becomes a slightly less decentralized network, as well as being a little less secure, Elastos maintains lower gas fees, higher transaction speeds, less energy consumption, more decentralization and more security than Ethereum, all without needing a multi-year upgrade.

While the Ethereum network has the most users in crypto, Ethereum developers take years to put out updates. One week can feel like a lifetime in crypto, so a multi-year wait for an update that other layer 1s are already doing (and doing better) may seem like forever.

On Elastos users can truly own their digital assets as the developer kit comes with a built-in decentralized storage system, something integral to web 3.0 that none of the supposed top blockchains seem to mention.

It also allows you to create your own decentralized identifier for free simply by downloading the native Super-Wallet, Essentials. As far as crypto wallets go, Essentials is up there with the best of them, competing with MetaMask and Token Pocket for the crypto wallet throne. It allows you to:

If you’re an avid DeFi user, you won’t ever need to leave your wallet application as you switch from Uniswap to PancakeSwap to Glide Finance and beyond on your quest to maximize your crypto yield.

The Ethereum Merge is over. The Beacon Chain has successfully combined with the original Ethereum blockchain, making the Ethereum network officially Proof-of-Stake. But what’s next?

While the Merge was a great success in dramatically reducing Ethereum’s energy problem (and making NFTs on the network more sustainable), it hasn’t changed the actual ease-of-use at all. Not yet. We love to see others succeed in crypto – even our so-called ‘competitors’ – but the truth is that there are far better options for development that offer cheaper transactions and are able to verify transactions at a much quicker rate.

A successful Merge is a step in the right direction for the Ethereum chain, but all it does in the immediate future is strengthen the determination of its Layer 1 rivals. As crypto enters a post-Merge world, other Layer 1s will have to step up their game in order to capture the attention of institutional investors.

All eyes are on Ethereum at the moment, so the Merge represents the perfect time to build. Elastos doesn’t sleep.